We visited Jelling to see the large rune stones of Gorm the Old and Harald Bluetooth. The stones were amazing, though not very well presented when we visited. They were doing renovation work around the stones with much digging and one stone moved aside to prevent futher deterioration to the stones. But we managed a peek ( and we get to say we've done that! ). 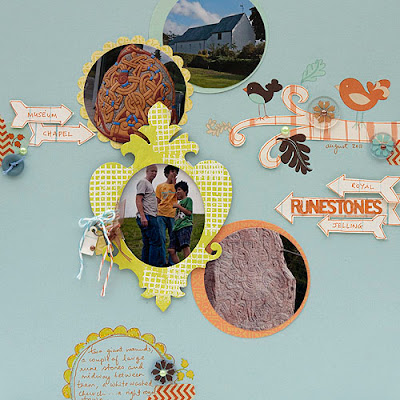 I didn't know this but did you know the bluetooth symbol 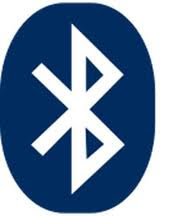 is actually the runic letters H and B, for Harald Bluetooth's initials.

This layout was done for the Bubbly Scrumptious challenge. I have used the colours from the board and as I was drawn to the arrow on the inspiration board, I made some of those for my layout too.
Posted by Ifa at 09:52 5 comments:

LOL, still can't help laughing at this. We stayed in a B&B in Sandwich, MA when we were in Cape Cod last July. And guess what they painted on the side of the police cars ? Sandwich Police! Ok, maybe it wasn't that funny but we giggled a lot that weekend.

Here's a layout from that weekend. 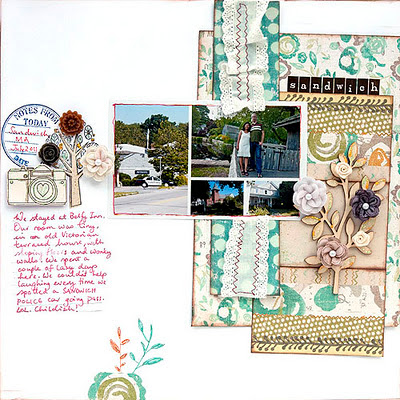 I've used a sketch from Scrapology for this layout.
Posted by Ifa at 07:00 5 comments:

H is due to go to Winter Camp in a few days so I thought I had better record his summer camp stories before they get all muddled up in the next installment.

Unlike J, H is always full of stories of his adventure though J is getting better. In fact J is probably the most animated about his camp trips. Anyway, today you get to hear about H's trip.

H went to Somerset for about 10 days last July with over 100 boys and some girls. They packed a lot of activities in those days. H spent a lot of time sleeping on his return. 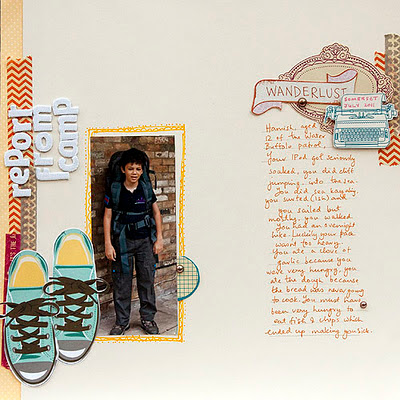 I wrote on the layout :-H, aged 12 of the Water Buffalo patrol, your IPod got seriously soaked, you did cliff jumping, into the sea. You did sea kayaking, you surfed (ish) and you sailed but mostly, you walked. You had an overnight hike. Luckily your pack wasn't too heavy. You ate a clove of garlic because you were very hungry, you ate the dough because the bread was never going to cook. You must have been hungry to eat fish and chips which ended up making you sick.

I have used a lot of Amy Tangerine...I adore those tapes. Inspired by the typewriter and reporters, it is called Report from Camp.

I did this layout for Created by ATDML Thirsty Thursday, playing with the letter G...G for Games and all things ourdoorsy.
Posted by Ifa at 14:00 3 comments:

I have been working with October's Kit which is full of autumn gorgeousness. This is my favourite layout, Folk Fest. 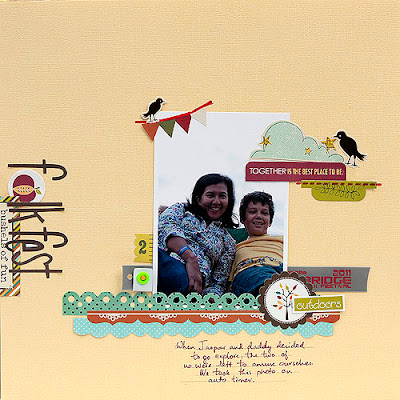 H and I were left on our own as J and A went to listen to another act at the Festival. So we filled our time taking some photos on timer.
Posted by Ifa at 14:14 2 comments:

I got to spend a day getting messy and inky with Dina last week. She taught us about colours and how to avoid getting a horrible brown mess. Here's what I made. 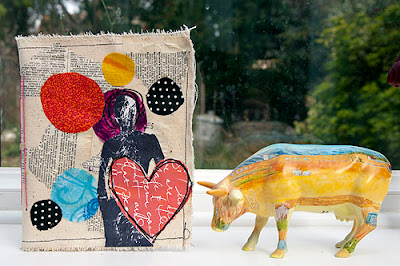 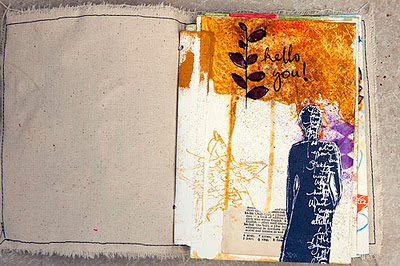 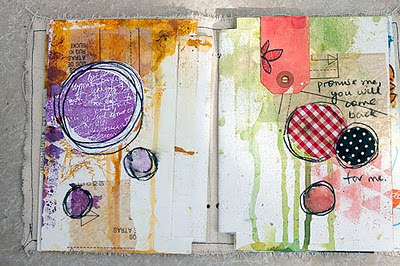 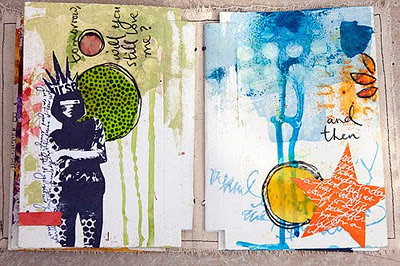 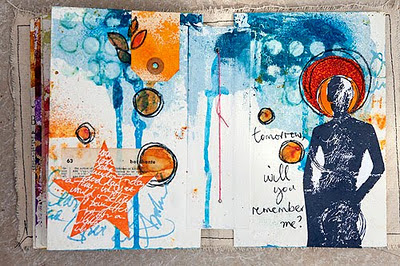 I wrote all over the book with what Dina called a magic pencil. I think I started a trend with "love is all you need". We got to road test Dina's stamps. I adore the heart and the star so guess who now has them ?
Posted by Ifa at 12:41 3 comments:

Are you coming ? Would you like to see what I have been working on ? 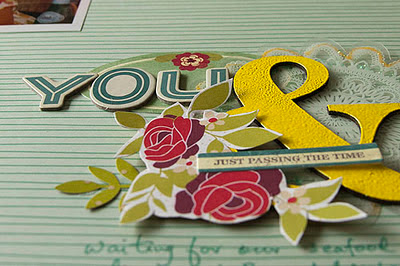 This layout is called You&I and features a 6X4 photo of DH and I. The & ampersand is quite a prominent fixture, so a photo of 2 people would be perfect. The size of the photo is not critical. You could use a smaller or bigger photo or even use 2 photos instead. 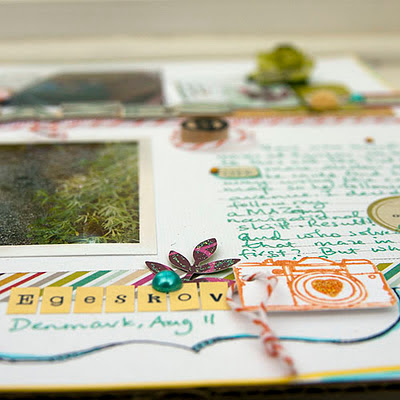 The next layout contains a 6x4 photo and a 3x3 photo of our visit to a garden at Egeskov Castle. We were trying to complete the Maze. For you own layout, you might want to bring playful, summery, outdoor photos.

We are working with American Crafts Garden Cafe supplied by Sarah's Cards. I adore those varnished accent papers!

We are also working with Tando Creative Multi Frame but that is not ready to share yet. If you want to be photo ready, you can check out the measurements at Tando's website. I am using 3 photos to go into the largest aperture, two ovals (3.5 cm x 4 cm ) and the centre circle ( 3.5cm ). You could use four photos to go into the four largest ovals or even 5 photos. Due to the smallish size of the photos, you might be best to go with clear head&shoulder, passport type photos.

Please bring your normal tools such as pen, ruler, knife, scissors and adhesive. You also need wet adhesive such as PVA or diamond glaze. If you have it, please bring a heat gun for embossing, wipe clean mat and some brushes for acrylic paint.
Posted by Ifa at 14:53 4 comments:

Bad boys at the Museum

Why did you write "Bad" on a board and held it up to be photographed ? Should have known, A did it and photographed the boys holding the boards. This photo was taken in the Children Museum at the National Museum in Copenhagen. 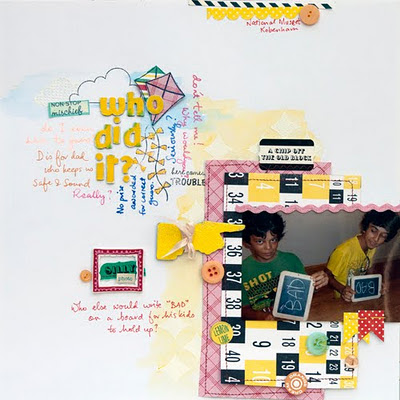 This layout was done for Sarah's Cards October Challenge. Do join us for a chance to win £20 to spend in the store.
Posted by Ifa at 13:55 3 comments:

These are the layouts we made at Cambridge Croppers last week. 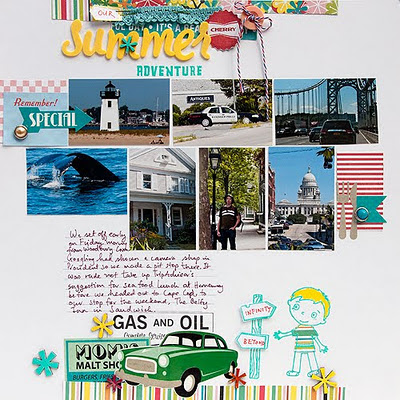 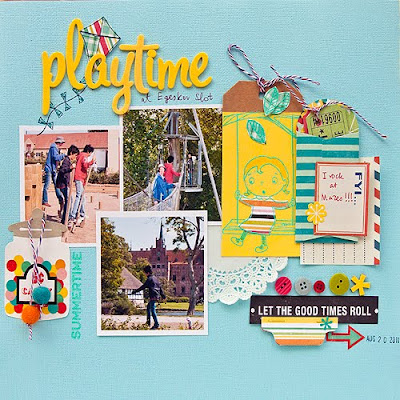 Is Helen B. Helen, your parcel is going out to you this afternoon. Enjoy. Thank you all for taking part.
Posted by Ifa at 14:04 1 comment:

It started with this. 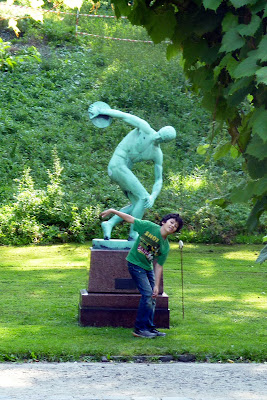 A asked H to imitate this discus thrower at Copenhagen's Botanical Garden. 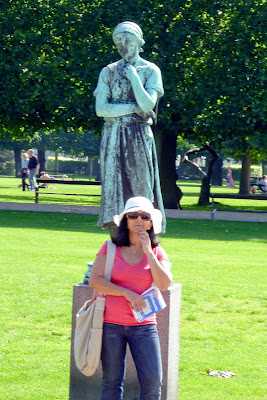 Then I was asked to pose with this lady in Rosenberg. I had an easy pose and yet I didn't even do a good job of it. 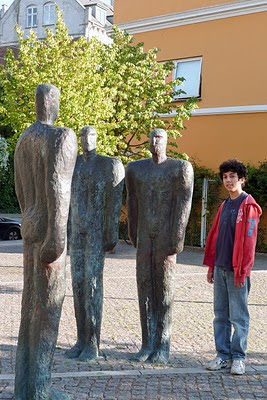 I made this layout with J's photo, "Can you hold that pose ?" based on the Scrap Map for October challenge on Creative Craft World. 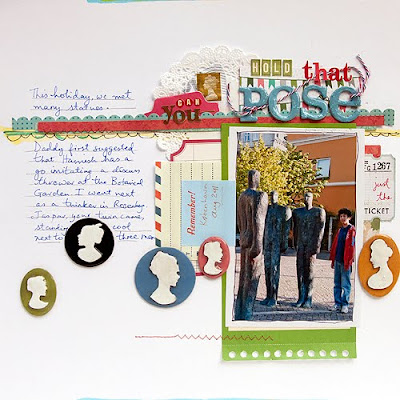 This layout gave me the perfect opportunity to use those Maya Road chipboard cameos which I painted and glazed with Diamond Glaze. Even the queen's sneaked in with a stamp! I also took the opportunity to use my favourites at the moment, some Cavallini Post-it notes.
Posted by Ifa at 08:00 3 comments:

Over ten years ago, I started getting red rashes all over my face whenever I exerted myself. Nothing like a marathon or extensive work out, just running to catch the train for work, that was just there, on the platform. Over time, I could feel the itchy rashes spreading to my scalp...eugh! Not sure what I look like but can't be pretty, can it ?

Over time, the unsightly rashes came with less and less exertion, some times just cycling a small hill in Cambridge. I also started getting a headache a few hours after the exertion. I couldn't even play boxing on wii. Running up the stairs on London underground meant I would have to pay later.

The headache got so black after a bout of tennis coaching in 2006. Something is very wrong! I went to see a doctor. I had various test but everything was normal. She offered to refer me to a hospital but reckoned it was merely the stress of moving to the country. Since she put it like that, how could I be so hysterical ? I decided to suffer and exert myself as little as possible. But sometimes just walking on holiday could give me the blackest of headache and at times, heat stroke.

By the beginning of this year, I was getting a headache nearly every week. I am now in a different area with a new GP so maybe I can get a second opinion. In April I went to see a doctor. She examined me, ordered some blood tests and said, "You are just dehydrated". I let on that drinking a glass of water seemed to bring temporary relief from the headache.

So I went home and drunk plenty of water ( but I was also permanently needing the toilet ) so I decided to give up on tea. I had the worst one week of withdrawal symptoms. Yes, including those headache but at least the water was helping and I didn't need to go to the toilet quite so often.

After that week, I am almost free of headache and I don't get those rashes, cycling. I am now doing Zumba (lol, on the wii ) without fear of later suffering. I miss my tea but I don't miss those terrible headaches.

ps:I have tried decaf tea but that brought on the same symptoms so it is not the caffeine.

This story was written for Sian's Storytelling Sunday. Please join us.
Posted by Ifa at 12:13 13 comments: